>>Live365, a true pioneer, started webcasting in 1999 when it was revolutionary to let people stream and listen to internet based audio. The talent and passion of its webcasters quickly brought a global audience and explosive growth. Live365 grew to support tens of thousands of diverse Internet radio broadcasters by offering a one-stop-shop of tools, music licensing, and distribution. Unfortunately, due to changes in U.S. licensing laws, Live365 closed on January 31st of 2016. It was a sad day for Internet radio and the many passionate programmers and listeners who had poured their heart into Live365.

With new owners, a renewed passion for webcasters, and added experience, Live365 relaunched on May 01, 2017. The ‘new’ Live365 is even more dedicated and passionate about giving small webcasters the best place to stream on the internet. With powerful streaming tools, monetization and listening distribution, Live365 is again the best one-stop-shop for your internet radio station.<<

We have a new staff and an exciting new platform, with an intuitive interface, and expanding functionality. We look forward to seeing you broadcast on the new Live365 platform! Sign up for a new broadcaster account here: https://live365.com/broadcaster/index

A snapshot of the new interface looks something like this.  This page is from the trial period I enrolled in, with a 7-day limit.  Not really enough time to explore Live365 capabilities in depth.  I will follow this post up with a discussion of the pricing on LIVE 365. 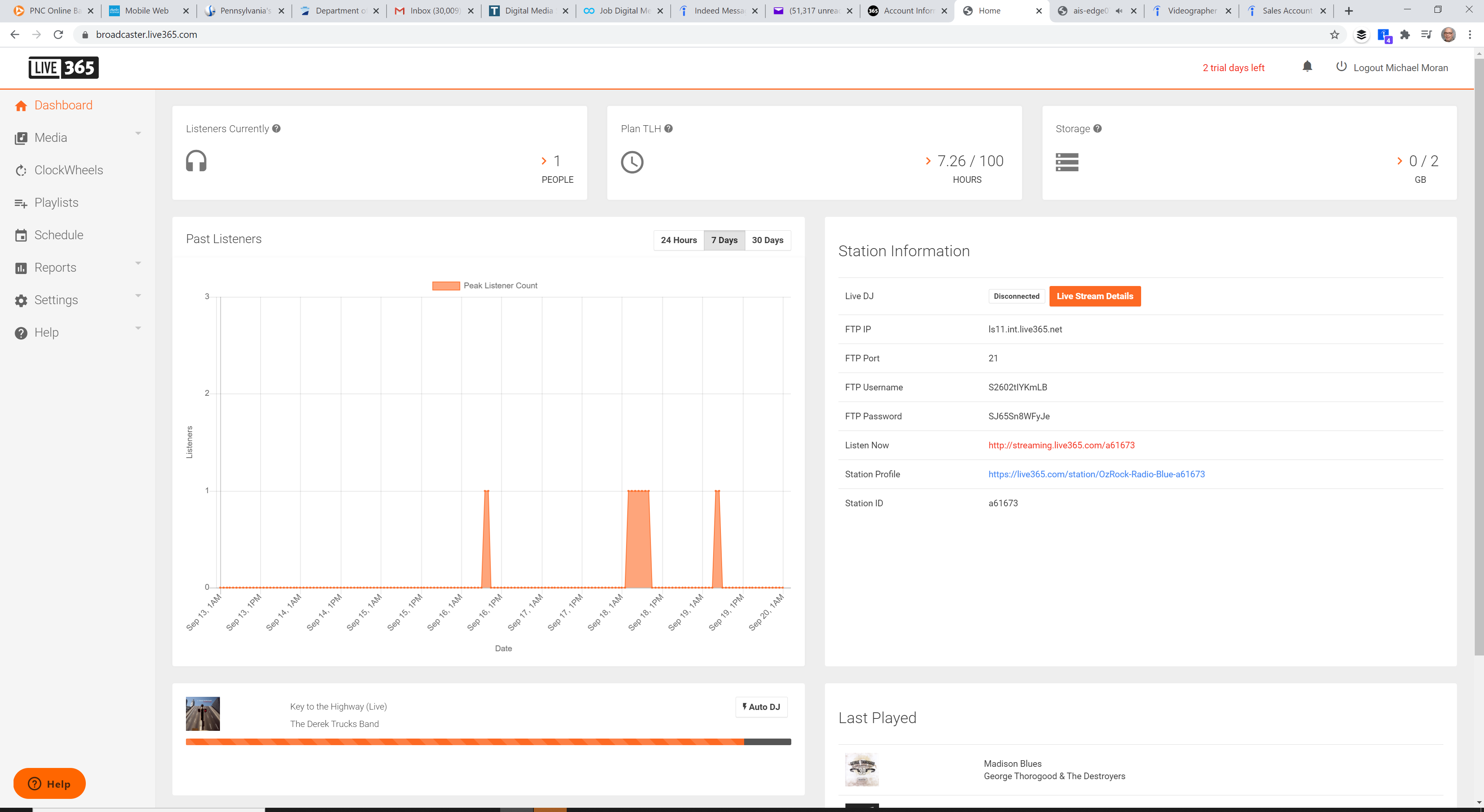 CHAPTER TWO  (Continued):
STREAMING SERVER TECHNOLOGIES
Live365
Live365 is an interesting hybrid between a server and the type of hosting service offered by the type of companies listed in Appendix A of this thesis.  Early on, it was referred to as an “audio homesteading service” repeating the signal sent from a single broadcaster so more people can listen to it.[i]  A similar model was used by the developers of the SHOUTcast server with a companion site called Shoutcast.com that aggregates the various online webcasters using the SHOUTcast server system and gives listeners a chance to select the various streams that appeal to their tastes.
Live365 offered the early SHOUTcast webcasters (circa 1999) the ability to send them encoded streams, which they would then rebroadcast and aggregate via the servers that they owned and operated.  Live365.com provided an interface for both listeners and webcasters.
Still operating and growing in 2004, Live365 does not function as a content provider, but still functions as a rebroadcast of content streams created by both personal and professional broadcasters.  Use of the Live365 servers as well as a software package to assist in uploading the audio content to Live365 is the basis of the site.  Live365 offers a proprietary media player, but can also direct streams to the other MP3 capable players discussed in the Media Player Technology section.
Live365 now operates as a for-profit company, and includes a subscription offering for both listeners and webcasters.  A free to listen basic service is available to listeners, but it does not include all possible station options, and does not prevent the listener exposure to pop-up ads, in-stream audio ads, banner ads, and sponsor buttons.  A Preferred membership sold for $3.65 eliminates all these forms of advertising and increases the number of Live365 stations accessible by the listener.  In addition, it now offers either  the capability for a higher audio quality stream using the MP3PRO format, (requiring the download of the Live365 player), or a player compatible with this advanced audio format.
>> Current VIP packages that provide commercial free listening are available for $5.95, $6.95. $7.95 per month at February 2012 rates. <<
Service for the webcaster are no longer free, but there is a variety of plans and payment options to choose from, depending on the amount of storage and concurrent listeners desired or anticipated for the service.  Personal broadcaster packages range from $3.95 month to $37.35 per month.
>> Personal broadcaster packages are expanded to many more price levels in 2012.  Prices now range from $3.95 per month to $99.95 per month.  Prices cover a range of storage space options, and the capability to increase the number of simultaneous listeners, which is a key factor in the growth of the station.   The sound streams at a CD quality rate of 128kbps, and includes payment of royalties for music being transmitted.  For more information on the set-up of a free trial of a personal broadcaster Internet radio station, follow the link below.  Look for a blog post in the future that will detail my experience with setting up a trial station.
http://www.live365.com/index.live        <<
A professional broadcaster has a variety of pricing options available to them, in part based on their preference concerning the required royalty payments for the various organizations that represent the copyright holders of specific pieces of music.  While we will cover the various responsibilities toward these organizations in Chapter 3, Live365 offers professional broadcasters a fee that includes royalty payments or one that does not include these payments.  Within these sub-categories are options that depend on total monthly hours, streaming bandwidth, and storage space.
>> From the brief discussion already posted to earlier blog postings, you can see the importance of copyright within the sphere of Internet Broadcasting.  While this is something foreign to most of us as we share music, videos and pictures to various web sites and platforms like YouTube, Facebook, ReverbNation and others, it is not something we can overlook as a Personal Internet Broadcaster, and particularly as a Professional Internet Broadcaster.  Live365 offers a convenient platform for both novice and established professional broadcasters to offer copyrighted material to their listeners while complying with current copyright law and fairly compensating the artists and producers that created the material they are using.  Here is an overview from their website of the plans Live365 offers.
“In respect of current legislation and laws enacted to protect copyrighted/licensed audio on the Internet, Live365 is proud to offer two pricing plans based on the type of audio you are considering broadcasting on your Internet radio station. Please be aware that this legislation and these laws are for any Internet audio broadcast whether you use Live365 or some other method. Live365 is committed to being at the forefront of these issues. We are proud to be the only company offering the options below.
If you are planning on playing any amount of copyrighted/licensed material that you do not own the rights to, or do not have expressed written consent from the copyright and/or license holder, we would like to offer these Royalty Included Professional Broadcast options that will ensure your Internet broadcast is covered for any United States royalty and licensing fees from SoundExchange, ASCAP, BMI and SESAC. If you are either planning on broadcasting non-copyrighted material (such as a talk show) or you will be licensing yourself directly with the royalty agencies mentioned above, Live365 is pleased to offer these Standard Professional Broadcasting Packages.”
These rates can be reviewed at:
http://www.live365.com/pro/pricing.html
For more information on the Live365 service, refer to:
http://www.live365.com/index.live
> This link is still valid, and is a good starting place to explore the Live365 site.<<